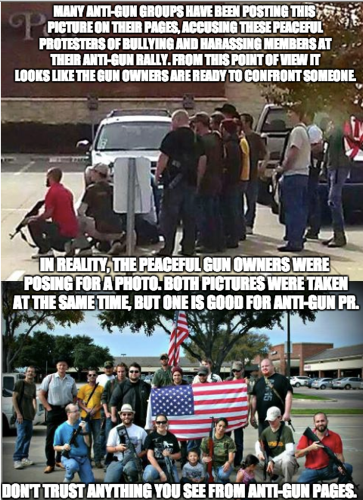 Open Carry has been a hot topic lately – from the Starbucks watery “policy change” to the grossly over-exaggerated interaction between all 4 members of Moms Demand Action and a Texas-based Open Carry Advocacy group in Arlington. Its a tricky subject to tackle – I realized this while reading a thought-provoking article – here are a few salient excerpts:

Regardless of the legislative/legal history of criminalizing ownership and possession of firearms, let’s look at this in a simple and pragmatic way.  What good is a “right” if we cannot exercise the right for fear that we will “lose” the right?  Does that not mean the right is already lost?

The logical paradox should be obvious and yet no one seems to see it.  What kind of strategy is this?  Are we hoping to save the right to carry openly until we really “need” it, only to be banned then? Don’t think for a second that government or anyone else will be content with banning open carry.

I wholeheartedly and passionately support the right for Americans to defend themselves. This includes the natural rights not granted by but preserved by The 2A for all law-abiding American citizens. However this passion and proud display of these rights is being used to hurt the RKBA.

In today’s political and social environment the War on the 2A is being waged by expanding on and exploiting disinformation and the fears of the low-information, often hoplophobic general public. These are people who don’t know much about firearms, have never fired a gun and could fall either Pro or Anti 2A depending on the experiences they have- whether in person or more commonly through mass media. This segment of America is the group that could have the greatest impact on the RKBA – because they are the ones who will affect future elections and to some degree the actions of politicians holding office. So how is disinformation being used to manipulate that group against the 2A?

Shannon Watts claims to have been a stay-at-home mom from Zionsville, IN for the past five years. However that’s where the lies and questionable background begin :
Now that you know all of that take a look at the photo at the top of this post. Watts orchestrated the photo outside her pathetic 4-member MDA meeting and then used her media contacts to manufacture a story that she could manipulate into excessive mainstream media coverage. All with a goal of portraying open carry advocates and every other gun owner in America as a misogynistic bullies who thrive on intimidating those who disagree with them.
The problem is that it is up to every single American gun owner to carefully think through their actions and especially interactions with others. People like Shannon Watts get endless free media coverage – and like it or not the public is exposed to those sound bytes and headlines.
The circumstances in America that led to this point suck. But we can’t change that immediately. I’m not saying that you need to hide your beliefs or even refrain from open carry. However it’s easy to scare uneducated people – and one even mildly bad experience with an open carrier can turn a voter against the 2A for life. As for myself I plan to refrain from open carry and work on taking noobs to the range to convert them into 2A fans for life.

3 thoughts on “The Open Carry Conundrum”