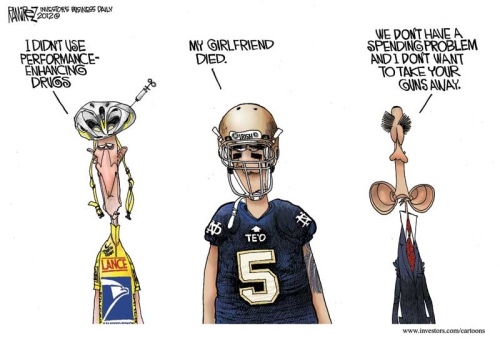 Rumor has it that we can expect Executive Orders to force some new gun control down America's throat. There were a couple clues offered in the bloody shirt-waving, foot-stomping, tantrum-like speech from the POTUS. Vice President Biden didn't have any home defense advice to offer today other than using his expression– which disables me with laughter every time I see it. So what new obstacles lie ahead for the strongest 10% in US history [CBS News Poll. March 20-24, 2013. N=1,181 adults nationwide] to fight though the courts and political process before they are overturned?

“Even without Congress, my administration will keep doing everything it can to protect more of our communities. We’re going to address the barriers that prevent states from participating in the existing background check system [Executive Order 9]. We’re going to give law enforcement more information about lost and stolen guns so it can do its job. We’re going to help to put in place emergency plans to protect our children in their schools [Executive Order 12].”- President Obama, April 17, 2013.

Ok – things that have already been ramping up and are pretty toothless compared to the legislation than the S.649 amendments were proposing. Seriously- I even support the idea of a campaign to promote safe gun ownership and storage- I detest people who are negligent with firearms- 4 simple rules are all that are required to prevent virtually every firearms accident.

What about some unexpected Presidential overreach as a new attack on Liberty? This is where we could see Obama get bold. It's not as if this hasn't been done before:

Scary precedents – I agree. However the good news is that public sentiment is not in President Obama's favor and the NRA is likely to tie up any extreme EOs in court leading to their likely demise after a couple years of slogging through the courts. Not to mention the SAF, which is going to need to make some bold actions to recover from its questionable support of the Failed Toomey-Manchin amendment.

Things could be far worse right now but thanks to the silent majority awakening and making their voices heard in Washington, D.C. the horizon looks pretty good. The key to maintain this state is to remain vigilant and keep an eye on our elected officials. And be sure to hit the polls in 2014. And 2016.