Emily Ekins is a calm voice of reason in a turbulent sea of distorted agenda-driven media. Perhaps that’s why she is a contributor to reason.com.  She can afford to be calm because she has the data to not only back up her poll results but also to address tire-kicking questions like ‘if the polls we see on the media outlets show different results how can I tell who is correct?’

You can check out her video coverage here or make the jump to see the highlights I’d like to add to this edition of Firearm Facts- Not Feelings. Despite the fact that the poll finds there is a slim majority in favor of a ban on A-WORDs 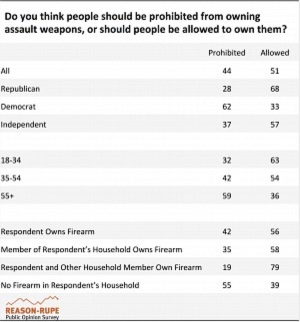 Some facts to take away from these poll results:

The results also indicate two things I find noteworthy:
The data in this poll strongly suggests that if a greater number of Americans were familiar with firearms the margins would shift to a strong stance against gun control. That’s right- no more panic buying, match triggers, lower parts kits, ammo and components– it could all be readily available again and stay available if we got a few of these so-called ‘progressives’ to shed their ignorance and fear of modern sporting rifles. How could anyone make a difference?
It could be as easy as talking to people and sticking to the facts without letting your emotion shade your responses. I will continue to add quality resources backed with facts to this site- share them!
Take a noob to the range- no political talk just have fun. Nick Leghorn is organizing an event for March 9 on this.
If you have not yet done so email your elected officials
and call the Congresscritters up for midterm re-election.
After all, it’s our right to defend ourselves and our loved ones in an increasingly uncivilized world at stake. And the ability of future generations to do so. Isn’t that worth getting involved to affect positive results?